As a smart driver near Lexington Park, St. Mary's County, and Mechanicsville, you deserve a truck that is second to none. But with so many able-bodied models on the streets, how do you know which one will be perfect for you? Enter Toyota of Southern Maryland.

To help you decide, we have taken two of the most popular models and put them to the test. In this Toyota Tacoma vs. Nissan Frontier comparison, you will see how these trucks measure up against each other, leaving you to make an educated decision. Which one will come out on top? Let’s find out. 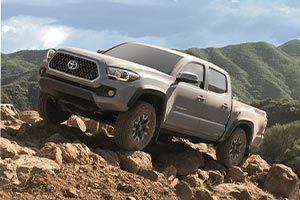 One of the most important aspects those in the truck market look at is performance. And while both of these models are very capable, there are some differences that should be noted.

The Frontier is powered by the 2.5L 4-cylinder engine that generates 152 HP and 171 lb-ft of torque, giving it a solid payload capacity of 900 pounds. The powertrain is also paired with a 5-speed manual transmission. However, a 6-speed automatic is also available.

On the other hand, the Tacoma features a 2.7L 4-cylinder engine under its hood. This generates slightly more horsepower at 159, but the real difference is in the torque. With this truck giving you 180 lb-ft of torque, you’ll receive a payload of up to 1,620. A 6-speed automatic transmission also comes standard in this truck model, for guess-free shifting capabilities.

There’s nothing that puts a damper on a trip like frequent stops to the station to fill up. Although the Tacoma and Frontier both come equipped with an impressive 21.1-gallon fuel tank, one of these trucks might leave you wanting a little more.

The estimated fuel economy for the standard trim of the 2019 Tacoma comes in at an efficient estimated 20 city/23 highway/21 combined MPG.* This allows you to hit the streets with fewer trips to the gas station.

The estimated fuel economy in the 2019 Frontier comes in a little less. With 19 city/23 highway/21 combined MPG on their standard model, you might find yourself filling up the tank more often, especially if you drive in the city a lot. Additionally, some of the Nissan Frontier trims can even get estimated ratings as low as 16 city/22 highway/19 combined MPG. 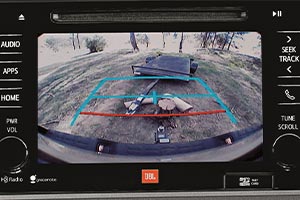 Safety comes first while on the road and this is proven to be true in both of these trucks.

In the Toyota Tacoma, you will receive a plethora of standard safety features, including the Toyota Safety Sense™ P systems. This includes the Pre-Collision System with Pedestrian Detection, Lane Departure Alert with Sway Warning System, Automatic High Beams, and Dynamic Radar Cruise Control.

Unfortunately, driver-assistive technologies like these are not found in the Nissan Frontier. However, automatic headlights and traditional cruise control are standard.

With more power under the hood, a better fuel economy across all trims, and a suite of safety features to give you peace of mind, we think you’re going to love the 2019 Tacoma. To see for yourself, hit the streets near Lexington Park, St. Mary's County, and Mechanicsville when you schedule a test drive with Toyota of Southern Maryland today!