If you need a new sedan to drive around the Lexington Park, St. Mary’s County, or Mechanicsville areas, then you’ve probably considered popular models like the 2020 Toyota Corolla or 2019 Honda Civic.

Of course, both are great options for drivers around our area, but we think one will be a better fit for your lifestyle. Which one will you choose?

To help you decide, our team at Toyota of Southern Maryland compared the 2020 Corolla vs. 2019 Civic. 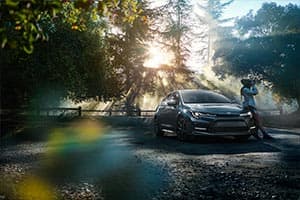 If you’re considering sedans, like the Corolla or Civic, then you’re probably looking for a fuel-efficient vehicle that can help decrease time spent at the pump during your daily commutes.

You’ll get that with either of these vehicles. Both of which get an EPA-estimated fuel-efficiency of 30 MPG city and 38 MPG highway with their base-level trims1.

They’re able to be so efficient in part due to their transmission. Both the 2020 Toyota Corolla and 2019 Honda Civic pair their base trim level with a continuously variable transmission (CVT). However, if you want more control, they both also make a 6-speed manual transmission available, too.

For those of you who really want to maximize your fuel efficiency, you might be happy to hear that the 2020 Toyota Corolla MPG achieves an EPA-estimated 53 MPG city and 52 MPG highway with the hybrid1

Both the 2020 Corolla and 2019 Civic help you stay safe and aware when you hit the road by including a standard suite of driver-assist technologies, which include:

One big difference we noticed is that the forward collision mitigation system for the 2020 Toyota Corolla also includes Bicyclist Detection, which isn’t something that appears to be available for the Honda Civic.

The Corolla also has a handy feature called Road Sign Assist. This keeps track of signs like speed limits for you and displays them in the driver dashboard display. With this feature, you’ll always be up to date on this important information. 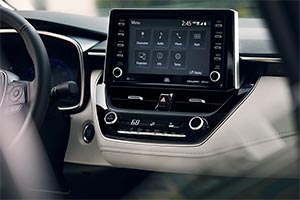 Finally, let’s take a look inside the cabin of the 2020 Toyota Corolla and 2019 Honda Civic. Both sedans feature a 7-inch touchscreen display in the center stack. This comes standard for the Corolla and comes as an upgrade for the Civic. Otherwise, the Civic comes standard with a 5-inch LCD display.

The Toyota Corolla also lets you upgrade to an 8-inch touchscreen system. Unfortunately, the Honda Civic doesn’t go any bigger than the 7-inch screen.

However, both sedans feature Apple CarPlay® smartphone integration. This comes standard in the 2020 Toyota Corolla and is available with a trim level upgrade in the 2019 Honda Civic.

Otherwise, both the Corolla and Civic come standard with Bluetooth® wireless connectivity that lets you make hands-free phone calls or stream music directly from your device through your car’s speakers.

It’s up to you whether you’ll drive the 2020 Toyota Corolla or 2019 Honda Civic. When our team at Toyota of Southern Maryland compared the two, we found that the Corolla has a bit more to offer drivers around Lexington Park, St. Mary’s County, and Mechanicsville.

If you want to give it a try for yourself, contact us and test drive the 2020 Toyota Corolla today!