Somewhere in this stack of copy, very soon, we will be driving the lug nuts off a 2021 Toyota RAV4 Prime, a plug-in hybrid version of the mega-selling compact crossover. It’s got legs. According to the EPA, a fully charged RAV4 Prime has an all-electric range of 42 miles. My more tangible metric: 25 minutes of hellbent, wife-in-labor speeding in near-freezing weather before the gas engine has to kick in. This is one robust little plug-in electric hybrid.

But first: In 2004 some wildcatters in Monrovia, Calif., reached out to me about their efforts to build a plug-in hybrid Toyota Prius. By enlarging the system’s battery and hacking the software, the eager minds at AeroVironment were able to make their little mule go for a few miles on electricity alone. Notionally, then and now, PHEVs would be charged nightly and commute mainly on electric power during the day.

The RAV4 Prime doesn’t run out of thrust at interstate speeds. It picks up pace like an iceboat catching a gust.

Toyota’s lawyers did not like it, not one little bit. The engineers asked if I could help. I said, “Um, have you met Toyota?”

So all these years later, to be sitting in this superbly engineered PHEV, from none other than you-know-who, the materialization of just the sort of system AeroVironment was proposing.…Well, if irony powered seat heaters, my butt would be very warm indeed. 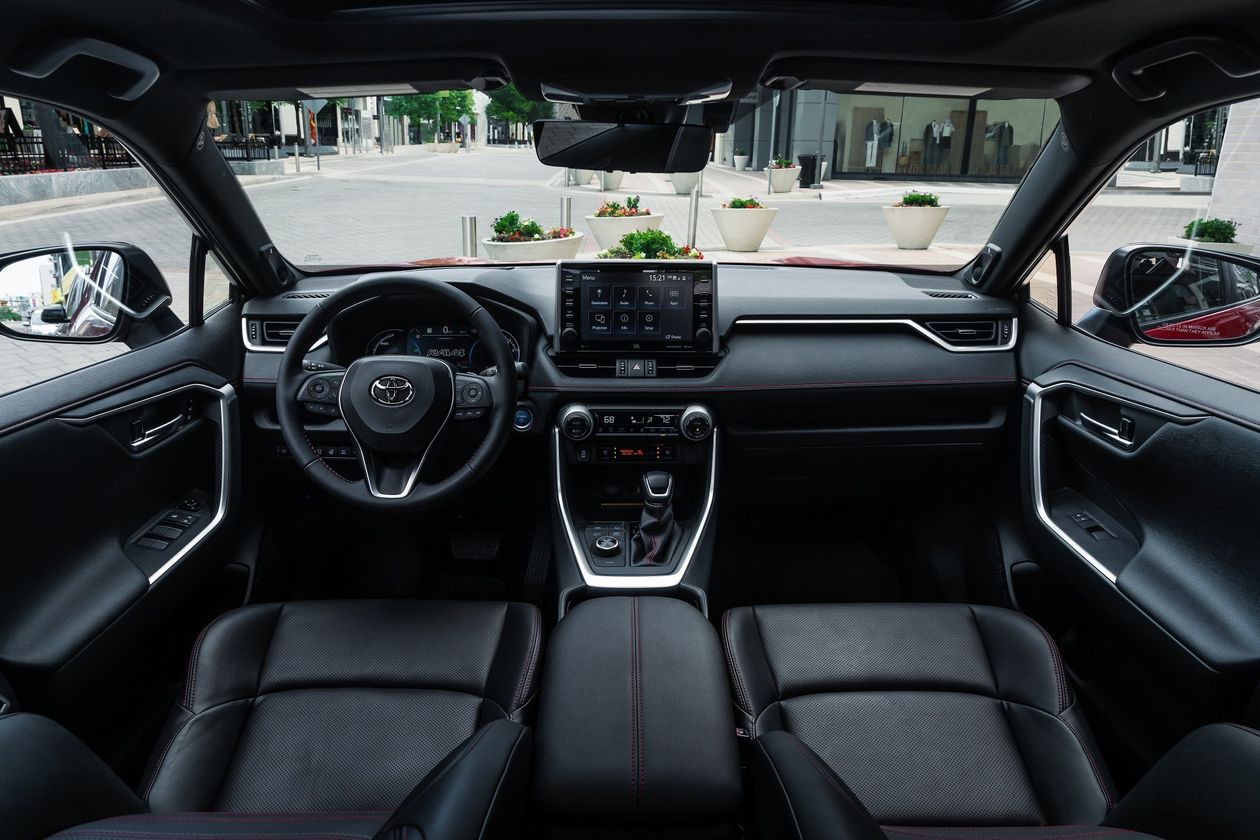 What follows is an argument with myself, of sorts. The RAV4 Prime does what it does very well, including the aforementioned hauling buttskie. The little sport-over can sprint to 60 mph in 5.7 seconds and, unlike many such critters, it doesn’t run out of thrust at interstate speeds, even in EV mode. Answering the order to pass, the RAV4 Prime picks up pace like an iceboat catching a gust, accelerating on the glide. That’s nice. Also, 2,500 pounds of towing capacity, on-demand all-wheel drive, and a diet of 87 octane, not premium.

There are some rough edges. When the 2.5-liter four is revving hard (14.4:1 compression ratio, eight ticking injectors), it is right there, loud and droning, and so is the CVT transmission. The rough-road capable suspension and all-season tires make handling a bit roll-y and nose-y, in and out of corners, less than fully confident. The brake-pedal response can be inscrutable. Apart from the regenerative braking effect, the friction side of the system, the discs and calipers, seemed a touch grabby.

The 18.1-kWh lithium battery under the floor manages not to intrude on cabin space, somehow. With the second row folded, cargo capacity measures 69.8 cubic feet, the same as the hybrid. Question: Shouldn’t the 40% part of the 60/40 rear seat-back split be on the right, where parents (in left-hand driving countries, at least) invariably put the car seat? For other markets, sure, vice versa. But in the U.S. the 60% should be on the left, to preserve cargo versatility even with a car seat on the right. I would be interested in hearing the counterargument, despite my obvious rightness.

Still, the numbers are compelling. With the battery charged, the RAV4 Prime’s fuel economy computes to 94 mpg-e. Even with the battery depleted, it rates a nominal EPA mileage of 40/36/38 mpg, city/highway/combined, delivered with a juicy drivability quite at odds with its efficiency. During its half-hour spells of electrification, I was the proverbial possum eating sweet potato. 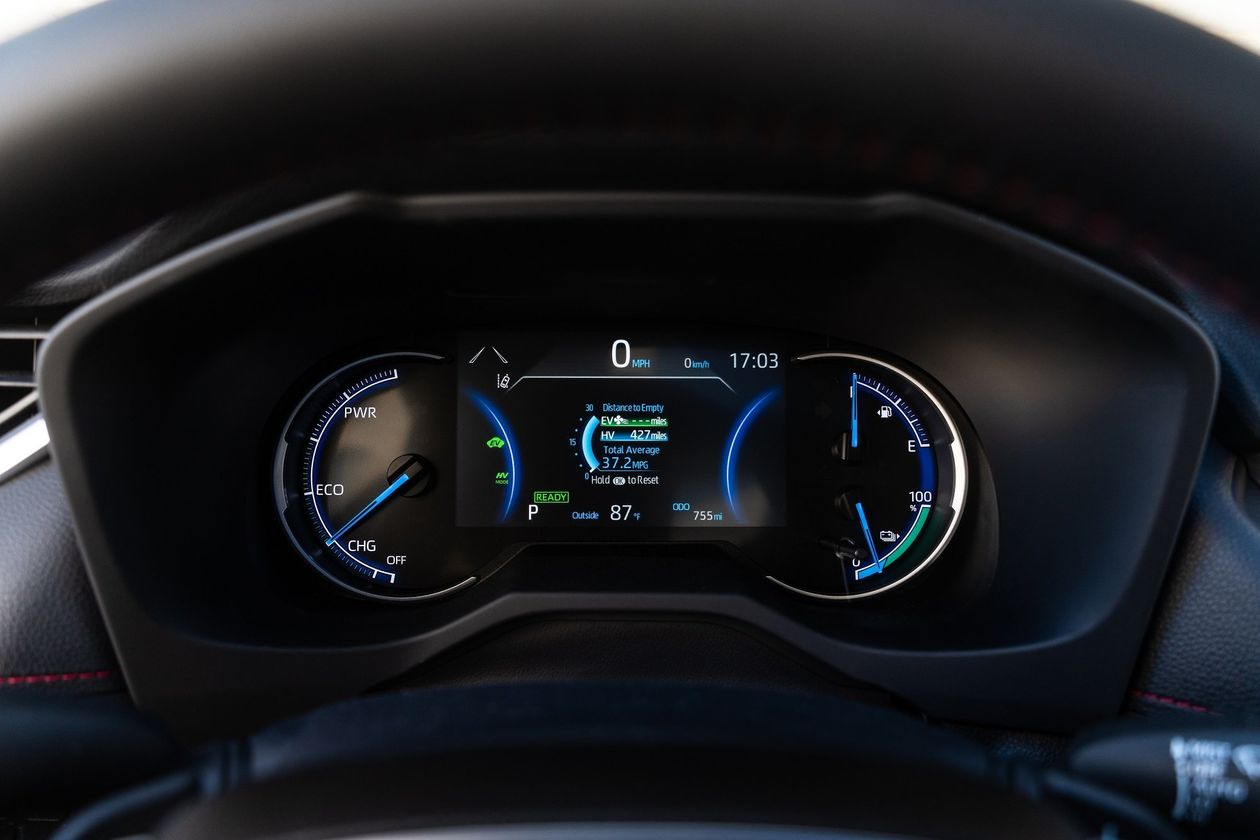 I don’t know how to feel about how good it is.

Everybody agrees that PHEVs are a transitional technology to electrification but nobody agrees on how long the transition should take. Some auto makers, like Daimler and Toyota, want to gradualize that transition with a generation of increasingly electric-forward propulsion systems, rolled out in such a way as to preserve margins and minimize compliance costs. Others, like VW Group, are leaning into the disruption.

So far the disrupters have investors’ confidence. Led by Tesla, battery development and commercialization has outpaced many auto makers’ product planning for the next decade, threatening to render a generation of PHEVs obsolete before they roll off the line.

When commercial batteries attain specific energy levels on the order of 500 watt-hours/kg, and when pack-level costs level off around $50/kWh—within a decade—mass-market EVs will be capable of 700+ miles between charges and cost less to build than gas-powered equivalents. With that kind of energy onboard you could make cars fly—and houses and restaurants. Gas-electric technology will become as irrelevant as quadraphonic sound.

The question for policy makers: Are PHEVs, even awesome ones like the RAV4 Prime, hastening or hindering progress toward electrification? And if the latter, should their purchases be subsidized by tax credits and other incentives?

Example: The buyer of a RAV4 Prime receives a $7,500 federal tax credit, which to me is just this side of robbing a post office. The specifics of the tax credit, an initiative of the Bush administration to encourage investment in advanced technology transportation, are badly out of date. Those credits were written when plug-in hybrids were experimental and a kWh of battery storage was more than $1,400. It’s now less than a 10th that; and yet auto makers are still putting in for the full dole. Nor is there any assurance that these PHEVs are being used in a way that contributes to the common good, i.e., daily charging.

It’s reasonable to expect the Biden administration will attempt to expand tax credits for EVs. It’s not as clear that PHEVs will keep getting the big breaks. In the meantime, I advise consumers to take the money and run.

The article is from The Wall Street Journal
The author is Dan Neil
Published on March 6, 2021