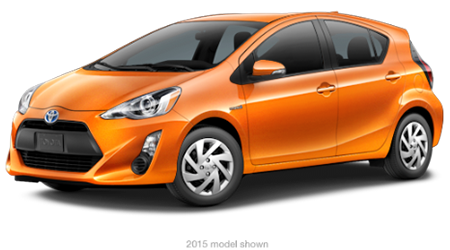 It?s delectable, dishy and dreamy. The 2016 Prius C isn?t just another version of the iconic hybrid sedan that started it all, it?s a completely re-imagined subcompact hybrid wonder that?s cuter, smaller, more efficient and less expensive than a traditional Prius. In this latest member of the Prius family you?ll find the same Hybrid Synergy technology that Toyota uses in all its high-end 2016 hybrid vehicles, and the same world-class safety features that make Toyota a very safe bet. The only thing missing is the famous elongated wedge shape, and premium price that hybrids usually cost. In fact, when you come to Toyota of Southern Maryland to test drive the perky new Prius C, and we explain how incredibly affordable it is, you probably won?t hear a word we say. That?s because you?ll be focused on the rich sound of the Prius C. Not the killer sound system and Pandora hook-up, but the whisper-quiet handling as the Prius C changes inaudibly from gas power to hybrid power automatically. In EV (Electric Vehicle) mode, using battery power only, you?ll get the same forward-pull rush you felt the first time you tried one of those newfangled two-wheeled hoverboards ? except much more intense and infinitely safer. So remember to try out the Prius C?s EV mode when you visit us at 22500 Three Notch Road in Lexington Park, MD. Don?t be fooled by our large facility. It?s filled with friendly, knowledgeable people who make a living by putting huge smiles on customers? faces ? nice work if you can get it! Proudly serving Mechanicsville, Prince Frederick and all of Southern Maryland for decades, we?re the original home of the Prius Family of hybrids.

Before we zip off for a spirited test drive, bear in mind that the new Prius C is true to its legacy. It leaves a tiny carbon footprint, saves even more gas than a standard Prius, and proudly boasts Super Ultra Low Emissions Vehicle certification (SULEV). But put the life-affirming 46 mpg highway and 53 mpg city EPA rating out of your mind, and just enjoy the ride. The Prius C has power to spare and enough acceleration to get you out of any situation. It?s also easy to maneuver and handle in the city, and it tackles traffic like a seasoned pro. After all, if you buy a shiny new Prius C, and you don?t dart in and out of traffic so as many people as possible see it, then what?s the use of living? Simply stated, the Prius C looks as good as it performs, and that?s saying a lot! Two power sources working in tandem, a 1.5L engine and a 60 hp electric motor, produce 99 hp for advanced get-up-and-go. Be sure to check out the Mode Selector which allows you to switch from ECO hybrid mode to EV battery-only power, so you can feel the understated power and refreshing versatility. It will surely be the most fuel-efficient test drive you?ve ever taken.

Inside the 2016 Toyota Prius C

Everyone thinks the Prius C is more expensive than the Prius, so you?re friends will never believe what a great deal you got at Toyota of Southern Maryland. You?ll save so much money on a new Prius C that you can afford to spring for all the tasty extras: Toyota?s top-of-the-line Entune? Premium Audio system with Integrated Navigation and App Suite is available in the Prius C. There are SofTex heated seats, frost-free heated exterior mirrors, and handy steering wheel-based controls to choose from, in addition to these available features:

Safety Features of the 2016 Prius C

Again, with all the money you save on your Prius C, and on your maintenance and fuel costs, you can outfit it with Toyota?s famous Safety Sense? C System (TSS-C), the epitome of automotive protection. It bundles together Lane Departure Alert, Auto High Beams, and a Pre-Collision System to help avert accidents, and it?s the culmination of over 60 years of Toyota?s industry-leading safety development. Even the nine standard airbags employ amazing technology to deploy according to severity of impact, like ?smart? airbags.

Here at Toyota of Southern Maryland in Lexington Park, MD, we haven?t seen a new Toyota model create such excitement since the inception of the original Prius, over 20 years ago. To see what?s causing all the buzz, come in to 22500 Three Notch Road in Lexington Park, for first-hand look at the little car that?s making big waves in the industry ? the 2016 Toyota Prius C!