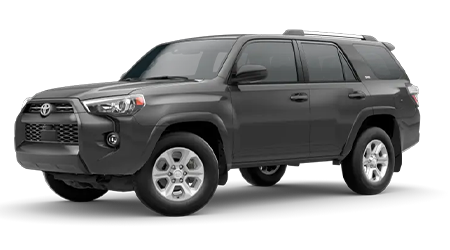 Are you the type of person who watches 4x4 truck TV commercials just to see if you?ve been on that patch of trail? Do you think pavement is for sissies? If so, we have the SUV of your dreams, the all- Toyota 4Runner. We are Toyota of Southern Maryland, one of the oldest Toyota dealerships in the nation, and we can let you in on a little secret: the Toyota 4Runner leads a double life. Sure, it looks like a million dollars, and turns heads at the swankiest valet parking lots, but underneath its handsome appearance lies a tough-as-nails body-on-frame SUV with off-road capabilities that other SUVs just can?t muster. The 4Runner was designed as a split-personality vehicle that handles the highway and city streets as well as it eats up gritty terrain. Most crossover SUVs are mostly sport with very little utility, city slickers that only once in a while require all-wheel-drive. The 4Runner is all-business, all the time, ready to kick up some dust at the drop of a hat. It was designed primarily as a formidable off-roader, but America has adopted the 4Runner as one of its favorite people-haulers and all-purpose family wagons. If you want to see the double-duty 2016 Toyota 4Runner first-hand, come to Toyota of Southern Maryland for a test drive today. We?re conveniently located at 22500 Three Notch Rd in Lexington Park, MD, and we welcome all our friends and neighbors in Mechanicsville, Prince Frederick, and all of Southern Maryland. The new 4Runner is here to conquer the country and recapture the city.

High Performance of the 2016 Toyota 4Runner

On or off the road, the new 4Runner performs the way you want it to ? and then some. With a powerful 4.0L V6 engine that cranks out 270 hp and 278 pound-feet of torque, the 4Runner runs circles around the car-based crossover SUVs, and gets you and your crew to your destination safely, rain or shine. Of course, you?ll want to get the all-wheel-drive (AWD) feature, but the rear-wheel drive option is becoming more and more popular with the millennial crowd.

If you?re ready for the next level of automotive adventure, step up to the this year?s Toyota 4Runner TRD Pro, the SUV that takes you off the beaten path and keeps you on the road to exploration. It features oversize TRD Bilstein® high-performance shocks and trail-tuned springs for unparalleled off-road handling. To compound the TRD?s body-on-frame protection, meaty quarter-inch aluminum skid plates have been added to protect the underside of the business end. Inside the TRD Pro?s cabin, be prepared to be impressed. The rich upholstery with contrasting red stitching and the leather-wrapped gearshift knob will place and your passengers firmly in the lap of luxury. The 2016 TRD Pro model also sports a dramatic new grille, matte-black alloy wheels and all-terrain tires. But even if you don?t have a 4Runner TRD Pro, you can get many of the cool TRD features and accessories on the 4Runner of your choice. Come into Toyota of Southern Maryland sometime soon, and we?ll help you put together the perfect Toyota 4Runner package.

The Best of Everything for 2016

You won?t find an SUV with a more rugged suspension, or any vehicle with a more favorable slow-ratio steering mechanism. Looking beyond 4Runner?s exterior good looks and dramatic new grille, the interior is both elegant and inviting. The fabric-trimmed seats, 8-way power adjustable driver?s seat with enhanced lumbar support, and remote keyless entry system make the new 4Runner feel like a rolling fortress with all the comforts of home. The Advanced Airbag System includes driver and front passenger knee airbags. These state-of-the-art airbags aren?t in place to protect the knees, but rather to stop the driver and front passenger from slipping under the dashboard when the main airbags deploy. To please your eyes and ears, Toyota offers the following standard and available features:

The 2016 4Runner is at Toyota of Southern Maryland

We currently have a nice selection of 2016 Toyota 4Runners in stock at Toyota of Southern Maryland, so drop by for a test drive soon. We service Mechanicsville, Prince Frederick, MD, and most of Southern Maryland, and we?ve become a destination dealership for discerning off-road enthusiasts everywhere. Come to 22500 Three Notch Rd in Lexington Park, MD, and we?ll hook you up with an exciting new Toyota 4Runner that matches your lifestyle and your budget perfectly.